Later Is A Lie

Ever met someone at a business event and heard them say, “I’m an Idea 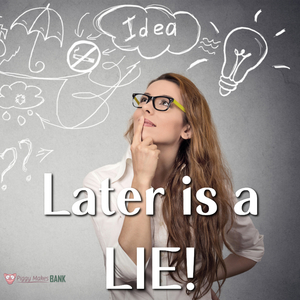 When they say it, it comes off like they’ve proclaimed a rare gift.

Now, if you were to introduce yourself to me and say ‘I play the violin!” – that’s rare. I don’t personally know one single person who plays the violin.

But listen friends – being an Idea Person is not rare.

Ideas are everywhere. Everyone has them!

Here’s what IS rare… implementing ideas!

I attended a training event this past weekend and wrote down a handful of ideas – really good ones. Each one, given time and smart implementation strategy would add income to my business.

Back home, I pulled out the notes and started transferring them into my online Idea Bank.  As I considered each individual idea, I asked myself one question first: “Is this so timely and important that I should implement it right away?”  If the answer was yes – I added the idea to my Now List.

If the answer was no, I consider whether it is important enough to do next – after the now items are complete. If yes, it goes on the Next List.  If I couldn’t say yes to that – the next question is to ask if its even a good idea for me after all.

If I’m not going to act on it Now and I don’t plan to act on it Next – will I ever?  Here’s where I find great personal and professional freedom.  If I look at the idea, even a truly good one, and don’t have a vision for working it into my business in the next six to twelve months – I trash it.

Yep, I wrinkle up the note paper and toss it in the garbage.

I’ve tossed a lot of fantastic ideas over the years.

Does the thought horrify you? LOL! I wouldn’t be surprised. I have friends who never throw any of their notes away. They have years of spiral notebooks or yellow legal pads with every jot and tittle noted from any webinar or event they attended. The prospect of throwing any of it away and losing the trail of some potentially valuable idea makes them shudder.

Not me, obviously.  In fact, my goal is to throw notes away as soon as possible. I don’t keep any paper trail if I can help it. I quickly move notes into a digital format. Currently, I’m enamored with Trello – it makes organizing and tracking my ideas smooth and easy to access from any device.

I’m choosy about the ideas I’ll give attention to. If an idea is on my Now List, it’s in active development. Every week something is happening to move it forward. I’m focused, so I’ll only keep a few ideas on the Now List.

Ideas I can’t focus on now, but really love, is on the Next List and gets a lovely bump to the Now List as soon as something there is completed.

Here’s a key point in becoming a Champion Idea Wrangler in your business: You’ll give up that pesky habit of fooling yourself about what you’ll do later.

“I’ll do it later. There’ll be time for that later. Later, it will work out.” If you’re saying later a lot – it’s trouble!

But what about those great ideas that aren’t right for Now and I can’t honestly say I’ll do them Next – but they’re so intriguing I want to evaluate them again in the future?  I don’t throw them away, instead, I put them on my Maybe Someday List.

The Maybe Someday List is not huge. Remember, I don’t fool myself into thinking I can do everything later. Time will be as as precious, and my focus will be as tight in the future as it is now.  If I hold onto an idea on this list, it’s a freaking amazing idea I believe I may act on at some point.  And that’s important – I ‘may’ act on them. I’m not lying to myself about it – I’m holding the idea lightly, so there’s no guilt later if I decide not to do anything with it.

Now, Next & Maybe Someday.  All my ideas live on one of these powerful lists.

Don’t fear trash can regrets. If a great idea is meant to be and I toss it out – it will come back around. I trust that with all my heart.

Know what comes from having this much focus and letting go?  I have peace!  I’m never overwhelmed by ideas. I’m clear about what I’m doing on any given day or week or month.  I’m not drowning in guilt or frustration because I can’t get everything done.

This is a gift.  Too many entrepreneurs overload themselves with ideas and try to do too much at once. They hustle, stay up late, multitask and struggle – and get very little done at the end of the day.

Best of all, I have space to jump on those spine tingling ideas that burst out of nowhere. You know what I’m talking about. You’re in the right place at the right time and BOOM, a glorious idea sparks in your heart – it’s perfect for NOW.

If you’ve kept yourself in a constant state of chaotic idea hoarding, you can’t act on the idea. It’s like looking at a diamond you can’t reach through a gutter grate.  It’s within sight – but not within reach. It’s maddening.

I keep things simple, shift and pivot quickly when needed and my business has grown consistently because of it.  You can get there too – If you’re willing to make some changes.

I challenge you right now to tackle your Idea Hoard with fresh eyes. Do a big Brain Dump where you put it all out there for review – and use my Now, Next & Maybe Someday categories to organize them – and throw a LOT of stuff away.

If you keep your focus on what you can implement in the next six months to a year AND keep your business community needs front of mind, you’ll be delighted with the results.

Want to know more about my Now, Next & Maybe Someday system – and see how I use Trello to keep it all organized?  Check out my Idea Hoarders training right here 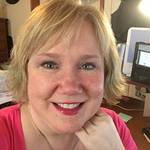 Kelly McCausey wrangles ideas, instigates communities, creates content & loves others – not necessarily in that order 😉 You can learn more about Kelly at her site Love People + Make Money

Advanced Strategies For Using PLR To Boost Your ROI