“What should we do, Franco? We need to find a way to make some money!” 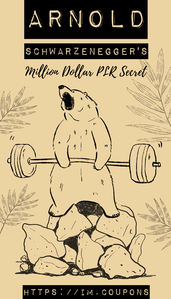 “Why don't we do some bricklaying,” Franco replied.

Arnold's eyebrows went up with a start.

He knew that Franco had a special talent for bricklaying. One that he'd masterfully honed in Italy and Germany. At the same time, it was something they could do in between their daily sessions of pumping iron at Gold's Gym.

They were gonna get paid to bulk up!!!

But there was just one problem…

What were they going to do about all the other bricklaying competitors?

Arnold Schwarzenegger had just moved to the U.S. with a couple hundred bucks in his pocket and a dream in his heart – to become the new Hercules of the modern era.

Body building wasn't in trend at the time.

And it certainly wasn't as heavily commercialized as it is now.

Sure Arnie had won a few competitions here and there. The prize money was enough to get by. But he was far from being rich. So in between his bouts of training, the entrepreneur in him yearned to start something. Something that would bring in the money. And among the first of these was his brick laying venture with his best friend Franco Columbu.

You have this resource that you can buy in bulk. And you connect the pieces together in different ways, attracting new customers and making up the foundation of your business.

But the problem is that…

… you're not the only one who has access to all those pieces of bricks or those bundles of PLR.

Other enterprising business owners are thinking the same thing as you:

Buy the PLR. Post the PLR. Make some money.

It's not about the resources you have, but rather how you use them that will determine your success in this dog-eat-dog world.

The first thing Arnold and Franco tried was to undercut.

Not a single customer.

Don't go for cheap. Don't go for quantity. It seldom works. Unless you're Walmart. You'll drive yourself into the ground eventually.

It's not about how cheap the PLR is or how much you put out there.

Quality matters. But so does how you use it.

After failing miserably with their “low prices, huge quantity” strategy, they decided to try a different approach.

“Let's change our positioning. We'll niche down and call ourselves European bricklayers and masonry experts.”

And so they did. They even started charging European prices on top of that.

It was just a shot in the dark.

The cheap approach didn't work. So we narrow down and go luxury.

… until they couldn't even keep up.

Business got so good that… Arnold eventually became a millionaire with just this one venture… long before he ever became the Body Building Champion of the world… and one of history's top actors.

When thinking about how to use your PLR, the first step of course is to go premium. High quality PLR. Just like you get from Piggy Makes Bank. There's too much low quality content out there already. People won't buy it. They want to consume good stuff.

But that's just what gets you in the door.

You still have to fight for a spot at the table.

You gotta find a way to stand out. And differentiate your PLR content from the crowd. One of the easiest ways to do this is to just do what Arnold did:

Find a way to tailor the content for a specific market in your niche. And hone your content to meet your audience where they're at.

Instead of using “Know What You're Good At” PLR content as is, you tailor it to a specific audience:

“Know What Type Of Affiliate Marketing You're Good At.”

“Know What Type Of Work At Home Job You're Good At.”

“Know What You're Good At As A Stay At Home Mom.”

Some time back, I was listening to a very well-known internet marketer.

He was talking about how he got his start in the business… buying Resell Rights to courses and making a living selling them. He was so successful doing it, that the course creator told him that he was their top seller by a huge margin.

And the vendor asked him what his traffic secret was.

But he replied that it had nothing to do with traffic. He just changed the positioning. And narrowed it down.

Instead of selling the courses ‘as-is' to everyone who wants to make money in general, he labeled the courses as being specifically for “Bloggers”.

Take your PLR content, and narrow it down. Tailor it to a specific niche or audience. Preferably one that's being underserved in the market.

And watch your traffic and sales soar.

By the way, do you know the one thing that Arnold did with all the money he made from brick laying that helped propel him to even greater heights?

If you take all the sales and income you'll make by nicheing down your PLR, and start doing this…

… the sky's going to be the limit.

But for now, always remember:

I bid you a good day…

Oh, and one more thing before you go: If you'd like to double, triple, or even quadruple your income with content marketing and PLR… my name is Allen Walker, The Mysterious Marketer… I've generated millions of dollars in sales using nothing but content and free traffic… and I'd like to give you special access to my private treasury of FREE PLR, marketing software, and more. All you have to do is CLICK HERE to get the link, and you can start rockin' and rollin' in the deep, deep dough…

Our Awesome Interview With Leonie Dawson

How Do PLR Articles Make Money?

Can You Get PLR To Rank?

5 Steps To More Profits With PLR